from the "San Pedro Chronicles" dept. 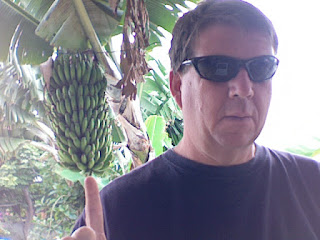 It's the rainy season here in San Pedro la Laguna, Guatemala and that means there's a lot of adjusting to do.

San Pedro's dependable climate allows one to plan for the daily deluge. And Lord knows that we North Americans need to plan everything – even while on holiday, which, if my mother asks, I am definitely not.

Each day the good citizens of this lakeside town have about six hours of beautiful warm sunshine with which to accomplish all their chores. It sounds like a lot, but the morning can fly by. Despite good intentions, I'm not super motivated to run off to the market at the crack of dawn. Maybe after a pot of coffee, a download of CBC's World Report, a check of the email, and, of course, breakfast.

Looking out my window while chuckling at the latest world news, I can see that the tourists haven't quite got the hang of our little micro-climate. They waste their days kayaking or hiking and those of us in-the-know hit the market to load up on the finest local fruits and veggies before the skies open up. The result: they're fit and hungry. We're not.

Speaking of fitness, I have started a new regime designed to transform me into a 30-year-old mountain biking fanatic (as I once was). With my new focus on fitness™, my personal shopping window slams shut around 10:30am – leaving just enough time to walk the considerable distance from my house to the local swimming hole.

The pool is run by an affable French Canadian named Daniel. La Piscina opens at 11am and I spend roughly 90 minutes a day trying to turn a lifetime of poor eating habits, excessive booze consumption and slovenly living into a rock hard body. By the time I finish, it's raining and the lightning is threatening to blast my not-so-rock hard body back to the Stone Age.

This daily exercise is not the spash-fest you might envision, likely because San Pedro sits nearly a mile above sea level. My shredded lungs are proof of that. After six weeks recently in the sea level lowlands of Vancouver, the smallest San Pedro staircase can still transform me into a pile of quivering blubber that can't catch its breath.

Add to this the fact that many of San Pedro's streets are really small-scale reproductions of Mount Everest. This is because San Pedro is built on the side of a (hopefully) dormant volcano that, by sheer coincidence has the exact same name as the town (San Pedro). More to the point, I have learned I am no Sherpa.

But we're getting off track here. And I need to pack up and get home before rain begins. I've had enough swimming for one day.

Cheers!
Scrawled by Doug around Wednesday, May 27, 2009 No comments:

from the "picture this" dept. 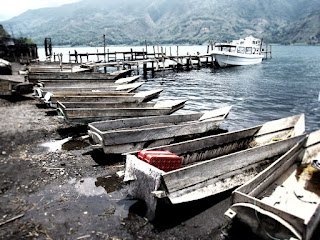 I've taken some photos (finally) around my new San Pedro home, San Pedro and Lake Atitlan. You can see them by clicking on the slideshow to the right or right HERE.

from the "editor and publisher" dept.

You've likely already read my Chernobyl story a dozen times... but it is appearing again today (May 21) in Vancouver's Georgia Straight. Click HERE.

Cheers!
Scrawled by Doug around Thursday, May 21, 2009 No comments:

from the "brains" dept.

Braiiiinnnssss....
Zombie ants? According to the AP, they're real and they're spectacular:

The flies "dive-bomb" the fire ants and lay eggs, and then the maggot that hatches inside the ant eats away at the brain. Later, the ant gets up and starts wandering for about two weeks, said Rob Plowes, a research associate at the University of Texas at Austin.

Although the ant exhibits zombie-like behavior, Plowes said he "wouldn't use the word 'control' to describe what is happening. There is no brain left in the ant, and the ant just starts wandering aimlessly." [MORE]

Cheers!
Scrawled by Doug around Saturday, May 16, 2009 No comments:

from the "rainy season" dept.

I'm back in San Pedro la Laguna and have moved into my comfortable new home that I will be housesitting for the next few months. I still have my charming rustic spot, but will likely let it go at the end of this month -- unless I find a tenant.

The rainy season has definitely started here. Rain overnight. Sunny hot mornings. Rainy afternoons. Rainy evenings. If you schedule around the downpours, it's easy to live with. And everything is dust free and green. Apparently there is a 3-4 week period in June where the rains stop. Here's hoping!

Since returning to San Pedro I've discovered the pool (La Piscina). Since returning, I've been spending 45 minutes swimming and doing watery aerobics. This is the hopes of kickstarting my turtle-like metabolism. I've also sworn off the beer, but as I write this a bottle of Red Breast Irish Whiskey is tempting me.

The plan for this trip is to write more, exercise more, and hopefully continue to earn a living. So far, so good.

Lastly, sad news about my Macbook. First the drive failed and now the whole thing seems dead. I may have to spring for a new one as I have some work that I must do asap as I've already been paid.

And you thought living in paradise was all tropical drinks and bikinis! Ha!

Cheers!
Scrawled by Doug around Saturday, May 09, 2009 No comments:

from the "back intact" dept.

I'm in the midst of dealing with a total hard drive crash on my laptop... so a short post only.

I made it back to San Pedro la Laguna on Tuesday. I met up with some fellow San Pedroans (?) and was able to make the 4 hours (rainy) journey in a private shuttle. This was very handy as my two bags were laughably heavy. Plus we bought tons of stuff at the Guatemala City version of Costco.

It's good to be back in San Pedro, but it is very quiet. Few tourists and many ex-pats have gone back to their home and native lands. This bodes well for working.

Doug
Scrawled by Doug around Wednesday, May 06, 2009 No comments:

Make it Earth, today!
A UK hostel booking agency is giving away a round-the-world trip for two -- not to mention a bunch of electronic goodies. All you have to do is answer a question and submit your email. But do it before May 8.

from the "Charley! Why?" dept.

The BBC World Service has produced a series of radio docs focused on West Africa. Episode #1 is an eye-opener. It tells the story of Spirit Children.

Programme one begins in Northern Ghana, with the story of one man and his efforts to stop the widespread killing of babies and children in northern Ghana. Cletus Anaaya has made it his life's work to bring an end to the phenomenon known as Spirit Children. [BBC SITE]

Important listening.
Scrawled by Doug around Monday, May 04, 2009 No comments:

from the "another one bites the dust" dept.

Sad news this morning that the Boston Globe could stop publishing in 60 days.

From the Wall Street Journal:

Unions representing Boston Globe employees continued to negotiate with the newspaper's management well past midnight Sunday, the deadline to agree to concessions to cut the paper's losses and avoid its closure.

Less than three hours before the deadline, the Boston Globe's largest union said it had presented a proposal to management that cuts costs by more than what is necessary to avoid closing the newspaper. The Globe, which is owned by New York Times Co., said it had told its unions it is prepared to file notice on Monday under the Workers Adjustment and Retraining Notification Act, which requires 60 days' advance notice before closure of a business. Management's statement, issued shortly after the union's, suggests the two sides might not be as close to an agreement as union leaders had indicated. [ MORE ]

from the "practice makes perfect" dept.

When I first watched this video of trials rider Danny MacAskill I was floored by some of the most technical riding imaginable. The second time I watched I was completely gobsmacked.

Ah, crap!
The Olympian is reporting that a man survived a small plane crash thanks to some well placed porta-potties.

A pilot was shook up but otherwise apparently unhurt Friday when his single-engine airplane crashed into a lot full of portable toilets just short of the Pierce County-Thun Field airport.

“The plane took off, he got about 150 feet in the air and his engine quit running,” sheriff’s spokesman Ed Troyer said. “He tried to turn around and come back and land, but he didn’t quite make it.”

The plane hit a fence, flipped over and landed upside down on top of the portable toilets, which were stored at the Northwest Cascade company, just northwest of the runway.

“The Honey Buckets kind of cushioned things,” said a Northwest Cascade employee who asked not to be identified. “They were the big, ADA-approved ones. I think they may have saved his life.”

KOMO-TV in Seattle has video here.

from the "faux news" dept.

The right-wing-nuts over at Faux News continue their never-ending tirade against the Obama administration. It's unbelievable that the network has the balls to use the word "news" in their name.

Check out their fair and balanced coverage of the first 100 days of Obama's tyrannical rule:

Unbelievable. And sad. So sad.
Scrawled by Doug around Friday, May 01, 2009 No comments:

from the "bird dance" dept.

The BBC has a cute little story today about birds and rhythm:

"Some birds have a remarkable talent for dancing, two studies published in Current Biology suggest.

Previously, it was thought that only humans had the ability to dance, but footage has revealed that some parrots have a near-perfect sense of rhythm." [MORE]

Click HERE to see video of Snowball, a sulphur-crested cockatoo getting down with the Backstreet Boys!

from the "beginning of the end" dept.

A Historic Snip
In 1989 change swept across Europe. It's hard to believe that 20 years has passed since those amazing days when anything seemed possible. The reality didn't quite meet expectations, but back then the sense of hope and the smell of freedom in the air was intoxicating.

A lot of events contributed to the fall of communism... like this one: On May 2nd, 1989, Hungarian authorities began to dismantle their border with Austria. As it turned out, this was the first hole in the dike. It started as a trickle but the old-school communist leaders soon realized the flow couldn't be stopped. From the BBC:

On 2 May, Hungarian soldiers began to dismantle the barbed wire and electric fencing along Hungary's border with neighbouring Austria.

The communist governments of East Germany, Romania, and Czechoslovakia were furious. They feared that their own citizens would use this gap in the Iron Curtain to flee to the West. But Moscow did nothing. [MORE]

And so it began..

from the "blow out prices" dept. 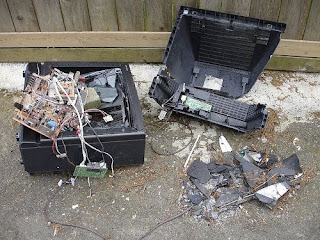 Bust the TV
It's not a good sign for the Canuckian media landscape when TV stations, once thought to be cash cows, are selling for $1. A DOLLAR! And a Canuckian dollar at that. That's what Shaw just paid CTV for stations in Windsor, Wingham and Brandon.

"Cable is rolling in money and can obviously afford to underwrite the losses. Good for them," Ivan Fecan, president and CEO of CTVglobemedia and CEO of CTV, said in a statement. [MORE]

from the "old school" dept. 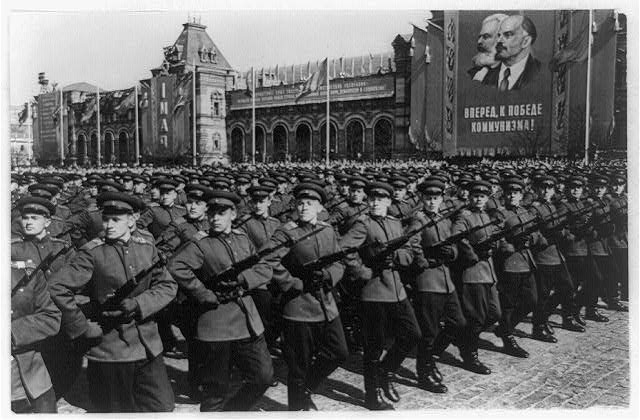