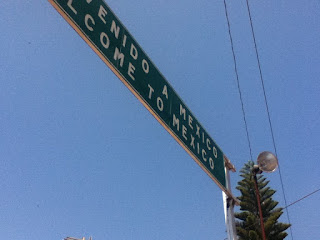 It was my second attempt in as many days to travel to Mexico.  My Guatemalan visa was fast running out, and I was required to leave the country for three days -- and then re-enter -- in order to get a new 90 day visa.

The first attempt failed after the main Central American highway was blocked due to either construction or protests or new electrical transmission lines.  It could have been all three.  And, unfortunately, I didn't learn of the road closure until after I woke up at 4am, took a 6am boat across Lake Atitlan and hopped on the shuttle bus only to be told that we weren't going anywhere.

The road up to the Mexican border was nice.  Just two years ago re-construction of the PanAmerican highway was nearly completed.  Most of the CA-1 from Guatemala City to the Mexican border at La Mesia is four-lane. Or, at least it was, until last year's heavy rains caused numerous landslides that wiped out much of the work.  However, repairs are ongoing and they've made really good progress.  Just in time for this year's rainy season.

The shuttle from Panajachel, Guatemala to Comitan, Mexico cost $25.  For this you get squished in a tiny seat, stuck between a traveller who has forgotten her brains and one that has forgotten to bathe.  Ah, travel!  The drive to the border is quite beautiful.  Lots of river valleys and mountains to gawk at.

At the border things got crazy.  We had to switch from a Guatemalan shuttle to a Mexican one.   First, though: Guatemalan immigration.  There were a few dozen people trying to get stamped in or out of Guatemala -- and just three guys working behind the desk.  Only one appeared to be doing anything.

That finally done, we walked into Mexico and boarded a new shuttle bus.  The girl that had forgotten her brains still hadn't found them.  She thought it a good idea to stand in the middle of the aisle on the shuttle so no one could get by.  Duh.

Eventually we were headed up the road to Mexican immigration -- about 4 km from the border.  The Mexican office was actually worse than the Guatemalan one: Just one guy was working.  And before you could get an entry stamp you had to fill out a form that you had to get from that one immigration official who was busy examining passports and stamping them.  Why they couldn't leave a pile of forms for people to grab is one of the great mysteries of the ages.  T-I-M:  This Is Mexico.

Back on the shuttle we continued our journey to Comitan.  There were numerous military checkpoints and accidents to keep us entertained.  Then it started to rain.

About an hour later we arrived in Comitan and tried to walk, in the rain, to the hotel.  After getting soaked we  gabbed a taxi (20 pesos/$1.66) to the hotel.  We're staying at the Hotel Eugenia (on Calle. 1 Ne. Pte. 22 -- just a few blocks from the central park).  For 220 pesos ($18) you get a clean, comfortable room with TV and wi-fi.  The shower is amazing:  Tons of pressure and super hot water.

After checking into the hotel we set off to find a bank machine and get even wetter.  That done, we sloshed into a coffee shop on the central park and had some damn fine Joe.  This was followed by a visit to a grocery store which, conveniently, had a restaurant inside.  I dropped about $15 on food that doesn't need to be refrigerated, water and a bottle of wine.  Steve had chicken for dinner ($2) and I had a couple of slices of mediocre pizza ($2).

It was then back to the hotel for a nice long sleep.

More to come!
Scrawled by Doug around Saturday, February 26, 2011 No comments:

This is one of those times when the picture really does tell the story:


Unlike the comfort addled nations of the so-called developed world, you won't find a lot of hot water heaters in Central America.  Cost is the primary factor -- most families simply can't afford such a luxury.

But most people also like hot showers -- especially travellers -- though, unfortunately, this does not apply to the faux hippies that seem to think that BO somehow increases their Bohemian street cred.

Thankfully, the fine folks at the Lorenzetti ducha company have come  up with an economic solution to this developing-worldwide lack of hot water:  The Suicide Shower.

Quite simply, it is a 110 volt electric heater stuck on the end of a water pipe.  The device automatically turns on when there is water pressure.  Turn the tap, the water flows over the electric heating element and - voila! - hot water!  The temperature of the water is controlled by the amount of water pressure.  You want scalding hot?  Turn it to trickle.  You want tepid?  Turn it the tap 1 millimeter.  Careful!  Turn it too much and you'll be drenched in ice cold water.  Fun!

In my decades-long experience in using Suicide Showers, I've discovered some work better than others (if at all).  But if you get one that works well (like the one pictured above), you'll find yourself relaxing in a sprinkle of warm water and forgetting about the live wires dangling just inches from your head.

A word of warning, however:  There is a switch on the shower head that supposedly regulates the temperature.  Do not touch this -- especially if you are taking a shower.  110 volts coursing through your wet body while standing in water is not a great experience.  Memorable, yes.  But great?  Not so much.
Scrawled by Doug around Monday, February 21, 2011 No comments:

From the "Short and Sweet" Dept.

One of the things I haven't written much about is daily life in San Pedro.  So, in what will become a continuing series, I'll cover some of the day-to-day experiences of living in Guatemala.


San Pedro la Laguna is located on Lake Atitlan, one of the most beautiful places on the planet.  The lake is a mountain-top caldera surrounded by volcanos.  Despite San Pedro's elevation - 5,000 feet - it never gets too cold.  About 17,000 people live here and most are of Maya descent.  There are three Maya languages spoken around the lake.  Most indigenous people in San Pedro speak Tz'utujil and Spanish.  There is very little English spoken outside of the ex-pat and tourist communities.  Lake Atitlan itself is located in the southwestern part of the country with the Pacific ocean a few hours away by bus. Volcan San Pedro towers over the town and is, hopefully, dormant.

Weather:  Winter and spring are dry.  It seems it's always sunny.  Cool nights (mid-teens) and warm days (high-20s).  It gets warmer during the day as we get closer to summer. The summer and fall are wet.  The temperatures are warmer, but it rains every afternoon.  Last year it rained so much that there were a number of mudslides around the lake. This time of year is perfect - cool nights, warm days, no rain.  It's like groundhog day.

Banking:  There are two bank machines connected to the outside world.  There is now a third, but it is for local bank customers only.  You can take out 2000 quetzales per transaction.  That's about $250 at the official exchange rate of about $1-Q8.  Money is usually available, but sometimes there is a run on the weekend.  Luckily, I am able to run tabs at most businesses if I run out of cash.

Cost of Living:  I spend about $1000 a month.  That is actually high for living here, but not outrageous.  I am living in a hotel that costs about $190 a month.  The rest goes to eating out 2-3 times a day, a few groceries, coffee, laundry and general entertainment (beer).  If I had a kitchen, I could likely reduce my expenses by 30% if not more.  Last night I spent about Q150 ($18.75) at a local pub.  I was there for many hours using their internet and chewing the fat.  I had 2 imported Guinnesses, a couple of local beers and a plate of nigiri sushi.  My tab also included a 10% propina (tip).

In San Pedro you can eat cheaply (3 for 10Q tacos) or expensively (white table cloth dinner with wine $10). But at the end of the day, nothing is really expensive at all.

Once again I find myself in the middle of a battle that I wish would just go away.  Freedom vs. Responsibility.

You may be aware of my long term life plan: To travel/live in the tropics during the Canadian winter and return home to enjoy the first half of summer in BC and the dog days (plus fall) in Nova Scotia.  Surprisingly, I'm on the road to doing just that.

But:  I still have a bit of a yoke around my neck in the form of debt.  This is no one's fault but my own.  It comes from trying to live the dream before having the financial base to make it easy.  But things are changing. I am now working as a digital nomad, making decent money.  There is now light at the end of the tunnel.

Over the last few months, everything has been going swell.  I'm in a comfortable, clean and reasonably quiet $6-a-night hotel.  I'm busy.  I'm earning.  I'm paying off debt.  Every day is sunny and warm.  Perfect!

Then opportunity knocks:  How would I like to spend the month of April in a Manhattan apartment for the low cost of $50 a night.  Would I?!

Then opportunity knocks again:  How would I like to spend eight weeks housesitting in Lunenburg, Nova Scotia.  A seaside residence, complete with car.  Would I?!

My initial reaction to both offers was "Hell ya!"  I can use my freedom to live anywhere.  And those two anywheres sound perfectly perfect.

I jump on the internet in search of cheap airfares and/or points flights to make the dreams happen.  In moments I realize that there are none.  I ponder further and suddenly I see these opportunities come with price tags.  And they're not cheap.  Deflated, I decide that I can't take advantage of either of these opportunities.  At least, not yet.  Once there is no debt, there will be true freedom.  It's not far off, but it won't happen next week either.  The universe is delivering -- just a wee bit too early.

Sober second thought allows me to see that these opportunities aren't perfect.  New York would be great, but expensive.  The good thing is that it isn't going anywhere.  And I'll be able to stay there again in the not-too-distant future.

A trip to my home and native land will happen.  I have to renew my passport and deal with my taxes.  I've also got my fingers crossed for a Gulf Islands (BC) housesit in July and August.

So here I am, being responsible.  I've decided that it's better to live in a cheap tropical paradise than return to the cold.  There could be worse things.

PS: Know of someone seeking a housesitter in the Vancouver area this summer?  Or Nova Scotia?  Or both?  Let me know!
Scrawled by Doug around Monday, February 07, 2011 No comments: