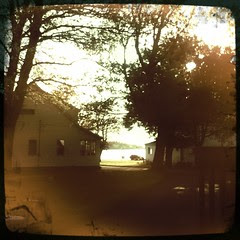 I've been in Pugwash, Nova Scotia for a little over a week now and I suppose it's time to write a few lines about the place that will be my home for the next six months.  And how living here is wa-a-a-a-y different than San Pedro la Laguna, Guatemala.

First:  A tale of the tape: 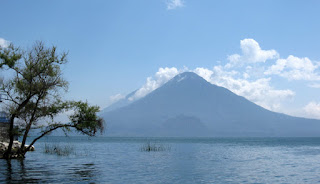 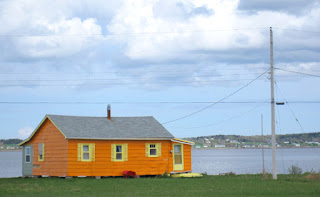 Pugwash
Population:  750
Languages:  English
Ethnicity:  Scottish/Irish
Elevation:  Sea Level
Climate:  East Coast Canadian
Bars and Restaurants:  A couple
Noise factors:  Lawn mowers, birds, waves lapping
But other than the above:  It's really different.  San Pedro is an extremely social place.  On an average day in SP I would have breakfast with a few others at the pool.  Then I'd go to a series of bars and restaurants for the rest of the day -- shooting the sh*t and hanging out.  Unless I had work to do, in which case I would hide in the corner.

In Pugwash, there are just a couple of places to hang out.  I haven't yet, as I've had work to do and I've been busy stocking up on supplies and driving around the area while I have a car.  It goes back to the rental joint next week.  After that, it's all feet and bike tires.

In San Pedro the weather is fairly constant - at least over the winter months.  It is consistently warm and sunny during the day and cool with a slight breeze at night.

In Pugwash -  well, the seasons are really changing so the weather we're experiencing now won't be like the weather once summer starts.  For now, it's mostly cloudy, cool and wet.  There are occasional sunny breaks -- which are glorious.  Hopefully the summer will be sunny, warm and long.

Pugwash is also cheap.  My housing is about double what it was in San Pedro.  But I get a whole house, not just a room.  Three bedrooms in fact, plus a deck, washer, dryer, full kitchen, etc.  I've spent a ton of cash since arriving:  A new bike, car rental, office supplies.  But all that spending was necessary -- and has now come to an end.  Going forward:  I'll be spending money on food and wine with the occasional one-week car rental once a month.


Right now, Pugwash is exceedingly quiet.  I went for a stroll last night and saw only a few people and even fewer cars.  This will likely change when the tourists start flocking here in the summer.  I'm enjoying the peace, though.  It's nice to sleep without earplugs and not have to listen to corner stores blasting the world's worst music.

And so, the latest adventure has begun.  So far, so good.

This (most recent) journey began back in late April.  A bumpy ride in a big white truck from San Pedro la Laguna, Guatemala to Antigua, Guatemala.  Then to Guatemala City.  From there, a big winged beast transported me first to Houston then to Calgary.  From there, a rental car delivered me to Cochrane.  Then, 12 days later, the same car returned me to the airport where I caught a flight to Montreal and then Halifax.  Another rental car brought me out to Hammond's Plains, where I've been hanging out for the past week.

Today is the final leg of the journey: I'm driving from Halifax to Pugwash, NS.  And there I will remain for six months.  Excepting, of course, running back to Halifax to pick up some stuff not available in Pugwash and, a week from now, returning the rental car to the Halifax airport... only to take a bus back to Oxford and then figure out how to get to Pugwash.  At this point, I will not have a vehicle (not counting the bike I bought yesterday) for my stay along the shores of the Northumberland Strait.

And where is this Pugwash, you ask?  Right here:

I'm off to Halifax first thing Wednesday morning.  And I'll be there for six months.  Hard to believe.