from the "iran so far away" dept.

Mahmoud Ahmadinejad, the man at the centre of the Iranian crisis, finally speaks:

from the "Sunday that wasn't" dept. 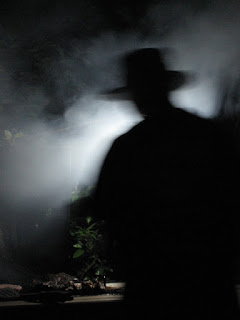 But not this Sunday.

The rain has returned with a vengeance. It was heavy last night and continued through the day. And it continues this evening.

The rain would have reduced the numbers of customers at the BBQ, but it would have gone on. And I would have braved the rain if only to stock up on chicken and pork. I usually buy a couple of pounds of both every week.

Unfortunately, Nestor crashed his bike and buggered up his leg. The BBQs are on hold until he heals.

So, I spent a lazy Sunday indoors catching up on the Daily Show and Colbert Report -- although it was hard not to continually scan the world news websites to get the very latest on the Iran situation.

Quite something, isn't it? And now Iran's state controlled English-language news channel -- Press TV -- is reporting that there were 50 cities where the voter turnout was more than 100%. Uh huh.

So are we seeing another revolution in Iran? Sure looks like it. An interesting week lies ahead.

from the "doodle doodle dee" dept.

- My Chernobyl story was published June 18, 2009 in the English-language Helsinki (Finland) Times. Read it here.

- There has been more interest in the same story by a newspaper in the Canadian prairies. Details soon.

- Still no word on whether I'll be working on a certain guidebook on Belize & Guatemala. I've been assured I'll know by the end of the month.

- The weather in San Pedro has become wetter. We had a nice spell with little rain for several weeks. But now it rains heavily every day -- although not until mid-afternoon.

- A planned trip next week to Guatemala's Pacific coast has been postponed.

- I'm planning to head up to Belize in late July for a new 3 month Guatemala visa and for a change of scenery.

- Work on other writing projects continues -- which keeps me busy.

Some longer stories for Roadspill are in the works. Your patience is appreciated!

from the "bookish" dept.

from the "this and that" dept.

Where have I been, you wonder? Oh here. Exercising. Working. Living. Sleeping. It's a tough life.

A couple of tidbits:

The Chernobyl piece has sold again -- this time to the English-language Helsinki Times. Publication TBA.

I managed to score some tickets for the 2010 Games. Hockey. Gold Medal Final. Bwah ha ha! I guess that means I'll be back in Vancouver for the games. Now all I need is a job and a couch.

Things remain quiet in San Pedro. There are some tourists, but they generally hang around the lame bars and trade beads. Many walk barefoot (despite the danger of stepping on some weird critters) and I am temped to ask: "What, you can't afford shoes?"

I would dearly love to sit down with some of the old timers and get their take on the faux-hippies. It's quite laugh inspiring.

One tried to sell me some homemade cookies (not the drug infused kind). When I told him that I buy local he started yelling. Yeah, whatever dude. You missed the Sixties by 40 years. Tough luck!

from the "media madness" dept.

"This nine-minute heartbreaker titled "Mad Ave Blues," sung to the tune of "American Pie," is sure to bring tears to the eyes of every agency creative type, media buyer, and trade reporter who love-hates advertising. Brilliant, and painfully nerdy."

Scrawled by Doug around Thursday, June 04, 2009 No comments:

from the "lost in translation" dept.

A CBC Newsworld translator got a little flustered the other day. Not surprising, it's no doubt a tough job. It's just too bad her mic was still on. Whoops!