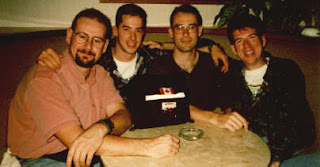 Where the travel bug first bit:
Halifax airport - Waiting to fly to Portugal - 1993
For the past eight years, interesting bits of my life (or censored versions of it) have been captured on this blog.  The ups, the downs, the challenge of make a living on my own while travelling this big planet.

Lately I haven't been writing posts as often as I should (blame Facebook), but I will make an effort to do so in the coming months.


I'm moving to Nova Scotia!
It's not permanent -- but it is long term.  Six months, in fact.  May 4-Nov 8.  After which, I'll likely move back to Guatemala for the winter.

This has always been my evil plan:  Live on the shores of Lake Atitlan, Guatemala for the winter and on one of Canada's coasts for the summer/fall.  I always thought a return to Canada would mean a return to the Pacific coast.  But not this time.  This time it's the East Coast.

As you may know, I've been trying to get back to Nova Scotia for a long time now --  17 years -- but it's never really worked out.

Even though I know half of the media and PR professionals in the province, I've never been able to make things click.

I've often wondered why this was -- and I think it may have been fear.  It's a pretty big chance to take -- just moving back to a place that you've been away from for so long -- hoping to find work and having enough cash to cover the expenses if things don't work out right away.

I've visited Nova Scotia many times over the years and each time that I returned on holiday, familiar feelings would well up inside.  A love of place.  A sense of belonging.  It was as if my former home was calling me back, punctuated by many close friendships that hadn't faded.

I've been to a lot of places, but Nova Scotia -- Halifax, The Valley, Cape Split, Cape Breton -- all of it -- has always had a special pull.  I enjoy it more than any other place on earth.  If I ever had to put down roots and stay still, I know where that place would be.

I often think that this connection is odd.  While I was born in Halifax (a Grace baby), Nova Scotia was never really the place I came from.  I grew up in Manitoba and only lived in Nova Scotia for 6 years as an adult.  But the connection is definitely there and it only seems to grow stronger as the years pass.

Friends in Pugwash, up on the Northumberland shore (warmest waters north of the Carolinas, don't ya know) have made this possible.  While they head to the cottage for the summer, I get their house.  The bonus: I'm centrally located between all the places I want to visit.

My flights are booked (April 22 to Calgary, May 4 to Halifax, Nov 8 to Guatemala City) and everything is in place.  This is going to be a kick-arse summer.

So, on this, Roadspill's 8th birthday, here's a line from the classic tune Farewell To Nova Scotia to sum things up:

But I won't be for long.

... it's been a while since my last post.  Not that I haven't been writing posts.  I've actually started two - I just haven't finished them. I will soon.

I just noticed that Roadspill will turn 8 next week.  8!  Go figure.